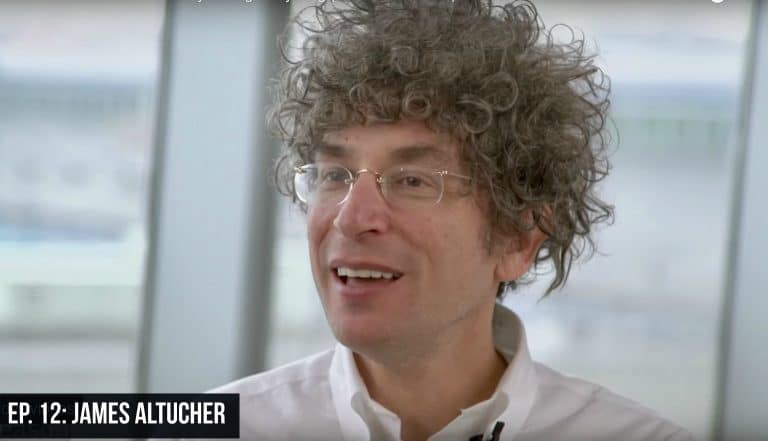 I never write about you know, oh this is how I became such a great x. What’s more interesting to me is exploring the vulnerabilities and the failures because that’s where I can learn. – James Altucher

To say James Altucher is an interesting guy may be a gross understatement. He’s a computer programmer, venture capitalist, former hedge fund manager, successful author, financial journalist, serial founder (20 companies), CEO, publisher, popular podcaster, chess master. He doesn’t own anything, lives exclusively in AirBnBs, does stand-up bits on subway trains. He’s been described as the “minimalist multi-millionaire” and the guy who failed his way to millions.

It was worth the wait.

On of my favorite comedies (top 5) is Forgetting Sarah Marshall and James, with just a mention of the film, rolls out a case study on failure and success with a story about the producer Judd Apatow. He riffs like Sherlock Holmes chaining all the connections and experiences that Apatow accumulated while struggling to make it in Hollywood and how it all dovetailed into Forgetting Sarah Marshall.

The interview is chock full of insider “here’s what I learned” nuggets like that.

Coming back from the bottom, over and over.

So here is why I wanted him on the podcast.

Losing it all happened to him multiple times, professionally and personally. He founded 20 companies, failed at 17 of them, yet wound up not only surviving but thriving in a media empire / business conglomerate. He is a comeback king with more sequels than Rocky. He is Mr. re-invention and literally wrote the book on it.

I wanted to know how he did it, how do you come back again and again?

In this episode, you can learn some of what he learned and shorten your time on the floor.

So consider this just a taste of the many lessons he expounds on.

1. Reinvention is a skill you can learn and a habit you can build.

When you talk with James he makes self-reinvention aspirational.

A lot of us have to reinvent out of necessity, but he says it’s something you should always consider. What is happening in the market, in your life and in the world that points to something new? Consider it disrupting yourself before being disrupted by outside forces. What new skills can you learn? What new habits can you develop?

Reinvention is a habit. It’s something you should always be on the lookout for…what stimuli from your environment can you take in and incorporate into your next reinvention – James Altucher

2. Ego is an enemy opposed to your successes.

James talks about how making the money gave him “… this ego to think that I could I could do other things that I had no experience in. But at the time I really had very little experience in anything.”

Ego says, you succeeded, and now you know more than you really do.

Ego says your successes were ALL your doing.

Ego blows you up so no other brains can fit into the room. Brains you need.

3. Know your boxes and check them every day.

When James was down and out he put together a checklist of activities that, if he did them daily, helped him recover.

They included things like getting enough sleep, swapping unhealthy relationships with healthy ones, writing, learning and reversing any behaviors that were not serving him (doing the opposite). During our chat, he goes into some detail on each.

James has the bounce back process down pat. He’s done it so many times that it’s proven itself over and over. Now he seems fearless because he absolutely KNOWS he can get back up again.

He has a go-to plan. He checks the boxes.

He really made me think about formalizing my own this checkboxes. Maybe I should create my own personal bounce wiki?

What gets you up when you are down? 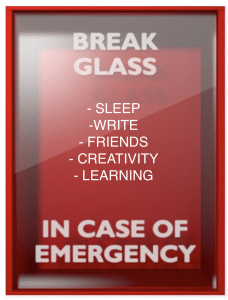 4. Creativity is a muscle.

I never thought of it that way. Like any muscle it atrophies if you don’t use it regularly. And if you’ve lost it you can get it back by exercising it.

On the podcast, he goes into detail about this process, and he elaborates on one specific technique that I’ve been trying, and struggling with.

James recommends no matter what that you write down ten ideas every single day. Business ideas, blog ideas, any kind of idea and they don’t have to be good ideas.

It’s the activity, the workout that’s important. The whole purpose is to do it for its own sake but don’t be surprised if a good idea or two comes from it.

I’ve read somewhere where James said he used a waiter’s pad back when to in write ideas down. I found out he still uses it; he showed it to me. 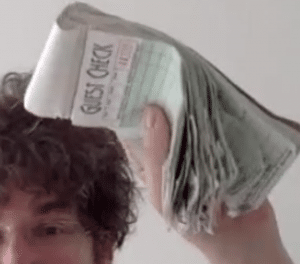 Point taken, you won’t do this unless you have something with you. I use my note app and keep a small notebook/pen in my car, JIK.

James also gave me a little tip on the idea side, and that is if you write an idea down and if you think there is something there, then you can flesh out “execution” ideas under the main idea in the same way. No matter how good or bad, go for volume and see what results.

He started doing stand-up, not to be a comedian but to learn a new skill.

Psychologists say that stretching and learning something new not only helps us be more confident but it’s a way of connecting with other people, which also adds to happiness.

People engaged in learning activities trigger changes in the brain chemistry. Our minds light up when we find new things for the it to do.

People say oh I’m 27 and I haven’t found my passion yet. Well there is no one passion, and I’m finding I’m constantly trying to find the things that I’m interested in…so I would never say I found myself. There’s nothing really to find, that notion of finding one’s self is kind of mythology – James Altucher

There is so much more on this podcast.

We talk about whys and wherefores of his business philosophy, how he looks at investments, writing, stand-up comedy and more.

On Forgetting Sarah Marshall and lessons from Judd Apatow [00:34:40]