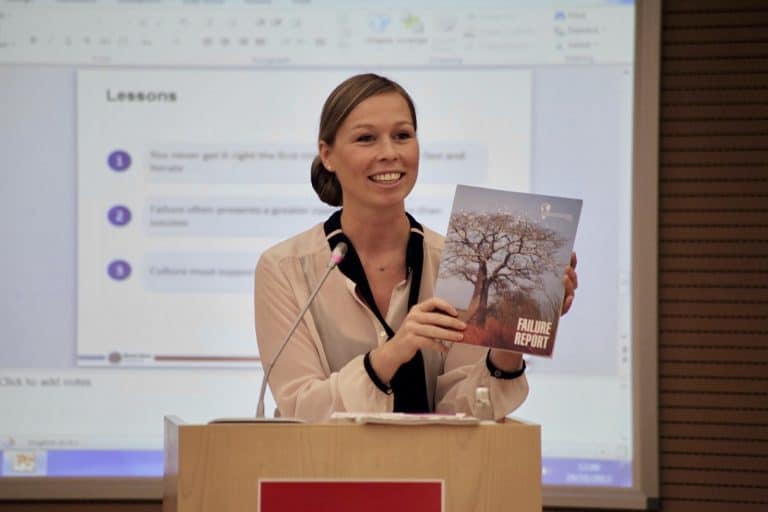 Talking about failure is and was just really difficult really taboo. We’re supposed to be successful all the time…this very linear path towards success. The reality is that it’s so much more messy than that – Ashley Good

NOTE: This is part 2 of a series on failure. On this episode, we talk with Ashley Good on how companies can fail intelligently. Part 1 is with Ryan Babineaux.

How can a company “fail well” and use failure as a catalyst for innovation?

Ashley Good is the CEO and Founder of Fail Forward – the world’s first failure consultancy – that supports people and organizations to acknowledge and adapt to failure in pursuit of innovation.  They do this by offering clients a set of tools and best practices to deal with failure intelligently.

Ashley offers a way to build the skills necessary to fail well. She says it’s a skill that we can practice but it’s one we’re often not taught. We’re just taught to avoid failure at all costs.

This was a very fun interview because there was no pressure.

We took failure off the table as any kind of “issue” as we were going to use any mistake we made as part of the show.

So lesson #1, reframe your failures as case studies and experiments.

And we made no mistakes, the conversation flowed. Funny how that works.

Perfection pressure is not conducive to good work or clear thinking. Seems obvious on a personal level but not so corporately.

Ashley says IF you as a manager can bypass shame and defensiveness, teams are more productive and if someone does fail, you can find a productive way of working through it.

A lot of people write and talk about productivity in the workplace. Never heard how defensiveness or shame may impact productivity. Maybe we should address that.

It’s all part of our conversation for this podcast: How would a large business allow for failure while trying to mitigate it?

Again, want to be clear here, we are not glorifying failure. Especially within a company. There are things that can sink a company, like losing a big client, financial mismanagement, lawsuits. You get the idea.

Not all failures are created equally.

Ashley says intelligent failure is what want to create room for because we know we need to try new things, experiment and adapt. But we need to acknowledge that there are high consequence failures that we should be avoiding at all costs.

There are failures that are blameworthy, where we intentionally deviate from a linear process.

Failure isn’t fatal, but failure to change might be – John Wooden

Here is something fun I learned talking with Ashley that I wasn’t aware of. There are networking events called Fuck-Up Nights that have entrepreneurs coming together talking about their start-up mistakes and failures.

It’s all about changing the conversation about failure and making it ok to share. People get up and talk about their screw ups that may have unwittingly resulted in eventual success.

Something that we could all learn from and emulate. We expend way too much energy in success proving and importance posturing. Ok, maybe I do, not you.

It seems opening up about your failures not only helps you get over it, but also helps others learn from it.

When Ashley tells her personal story about how she started her company, I couldn’t help but think of the many people I’ve talked to who found their calling or passion through some form of failure or pain.

Ashley was at one of the lowest points of her life, everything was hard and nothing made sense and all of a sudden a light went on.

“This intolerance that we have for those dark moments our inability to deal with them really spoke to me in my moment of darkness.”

And she was grateful for the experience because she says, up until that moment she hadn’t I hadn’t really failed at anything.

She makes a great point; We don’t really practice failing in ways that really matter to get good at it, to recognize that we can come through it.

Consider this podcast a form of vicarious practice.

Give it a listen and learn from Ashley.

[00:36:52] Differentiating between different kinds of failures