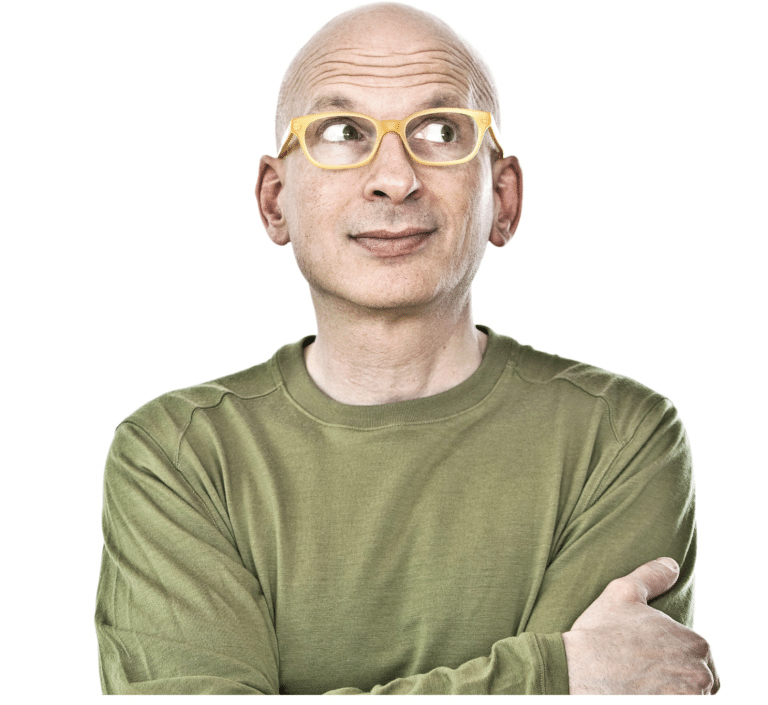 Search his name, “Seth” to Google is Seth Godin (after the third son of Adam and Eve of course).

Seth is the author of 18 best-selling books that have been translated into more than 35 languages. The book I discovered him by, way back when is Purple Cow, his thesis about attention being the game. He’s founded several companies including Yoyodyne and Squidoo. He is also the founder of the altMBA.

In 2013 he was inducted into the Direct Marketing Hall of Fame.

His new book This Is Marketing, You Can’t Be Seen Until You Learn to See, which is more or less the focus of our discussion, is the first, in his words, “real book from a real publisher about marketing” that he’s done in more than seven years.

Prepping for Seth was difficult, he’s so prolific. Well over 7,000 blog posts plus the books, videos and now podcasts.

What the heck do you ask?

The day before our chat his publisher sent a draft of the new book – which I didn’t know he’d written. I opened it for a skim and an hour later I had 2 pages of questions.

I’m not going to do him justice but here are a just a few of my thoughts and takeaways.

I’m sure this is how he’s always thought of marketing, he’s trying to level us up.

Maybe this is the type of filter or heuristic we should apply to all business related matters. Before you involving yourself in that project, joining that company or launching that campaign.

Will you be doing work that matters? Would you care enough to do it?

What matters has to be defined by you. Maybe that’s the hard part.

Marketing is the generous act of helping someone solve a problem, their problem – Seth Godin

This is the crux of marketing in my opinion. Addressing the real problem a potential customer/client has and clearly laying out how to solve it.

It’s not my pretty page or shiny new product, it’s your hard problem.

In 1999 Seth’s book Permission Marketing, was published. In it he elucidated the [then] new idea of delivering relevant, personalized messages that people agreed to receive. Practiced everywhere now but in 1999 it was pretty controversial, and it birthed the billion dollar permission-based email marketing industry.

Power shifted to the consumer – thier POV. But marketers and marketing got better. Permission increases the efficiency of marketing tactics, the prospects become more likely to engage if you do it right.

Seth talks a lot about culture; understanding it, changing it.

Right now the culture is hyper-connected. To paraphrase Cluetrain, the industrial interruption of the human conversation has ended.

“Markets are connected and they talk, just as they did for the thousands of years before market became a verb – with us as its object”

Sharing makes businesses and marketing more permeable. Word of mouth has scaled. The culture has changed and is changed by viral identification.

And that presents risks and opportunities. Consumers will see through what you do – to you.

Mail it in, do the minimum and reviews and hashtags will bury you.

But – if you use this permeability, use the cultural propensity to share / engage and you get better. You can invite more ideas into your company, improve your product, your service, your team.

We also talked about a concept that seems all too obvious on the face of it.

The internet is not a mass media.

But think about it. The internet seems like mass media because the masses are there. Eyeballs haved moved from papers and network television to web-generated / curated content. Ears have moved from analog radio waves to streaming sound.

However, people have self-selected their channels online; algorithms filter preferences and pixels have placed them in niche cookie pools.

It’s a micro medium or micro mediums, millions, all connected to one another. If you treat it like a mass market, you spend your way into a black hole. It’s why some large CPG companies struggle as they move online because detergent and toothpaste target the masses.

How can you be specific to “people like me”?

There are only 20 ideas that Seth says he uses over and over again, the long tail is one of them.

You know it I’m sure but here is a crib so we are all on the same page. The long tail is a distribution of numbers in which a portion are far from the shorter “head” or fat part of the distribution. It was popularized by Chris Anderson. 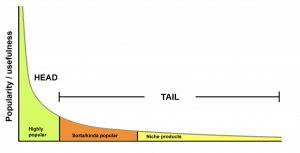 Seth reiterates the point that the internet has opened up opportunities in long tail that were not previously possible.

We tend to shoot for the fat part of the distro, the high spike with a mass market hit, the bestseller, the home run. This is rare with so many factors out of your control and incredibly expensive if try to advertise your way there.

Mass marketing is over, because the internet made up of apps, platforms and portals. It’s a niche medium.

There are no gatekeepers and the scale is infinite.

25 years ago there might have been 100 radio shows worth listening to. Now there’s a million podcasts…instead of being limited by FCC spectrum, we’re limited by the Internet, which is infinity – Seth Godin

Instead you can shoot for traction in the long tail, a niche market. There is much less competition, a niche is way easier to reach. Your target market may not even be served at the moment. You could be the first, you could get a hit there.

Your niche book, podcast or music can find an audience, a specific audience – for people like you.

This is the biggest idea in his new book, and if you only have 5 minutes you should listen to him expound on it here.

It’s a take on the lean startup methodology, the MVP (minimum viable product). It’s the early version of a product that has just enough feature functions to satisfy early adopters. Ideally, a product gets out in the marketplace sooner where it (hopefully) improves over time through iteration.

Enter the SVA, the smallest viable audience. It’s a counter intuitive strategy of selling to a smaller number of people – on purpose. You’re not shooting for the large group.

Identify the fewest number of people your product is really made for that you would need to delight in order for your business to move forward. Get their adoption and feedback, keep them happy and you will see growth.

They will be the ones who will rave about you to everyone else. They can write about your product, they can give you great reviews. They can be the best part of your marketing.

Once you find your SVA, now consider the other part of the distribution, the Pareto. You’re looking for your real fans that will generate most of your revenue.

You don’t need – and you shouldn’t expect – everybody to buy.

I’m arguing that success in the future is to say what’s the smallest number of people who could support me? Can I get by with 1000 fans who are paying me on average a thousand dollars a year? If the answer to that is yes. Then I say, pick the thousand – Seth Godin

Work to get those fans, listen to their feedback and ignore everyone else.

That’s not to say that it isn’t helpful or that he doesn’t use it. Just check out his Twitter stats.

Rather, Seth says it isn’t necessary to build a meaningful brand.

It’s not impossible. Just be warned that, again, if you treat the internet in all its socially connected forms like mass media, you will end up very, very frustrated.

He says we are doing the wrong things with social media while thinking we’ll get a right result. When we are “pump up” our fan base and follower count we turn signals into noise.

“You could be building a tribe instead, earning permission, creating a channel where your voice is actually welcomed.”

Make it easy for your tribe to discover you, use it but stop the myopic popularity focus, do the work that really matters.

I could write 50 things I took from our chat but I will spare you my terrible writing.

Go listen because there is so much more we talk about.

Just know you don’t have to be in business or into marketing to benefit. It’s about how to make change happen or as Seth puts it, to cause a change you’d like to see in the world.

You can subscribe to the podcast on iTunes or Stitcher.

Larry is a technologist, consultant and host of the Bounce podcast.
PrevPreviousTHE WISDOM ASSET:
NextWORKING WITH A.I. :Next